Welcome to Sacred Connections latest special offering from the depths of the jungle.

We are offering a sample kit with rapé from iconic tribes directly out of the Brazilian Amazon. The kit consist of five 10 grams packs from five tribes, Kuntanawa, Yawanawa, Nukini, Huni Kuin and Katukina.
They include some of our all-time favorites, and we hope they will become yours as well. We selected five different blends, some more herbal, others more natural, powerful masculine blends and a beautiful female one.

Força means strength in Portuguese, and this medicine does it names just. It was made with strong tobacco and Tsunu ashes. A touch of Apuxuri, a refreshing herb from the Amazon, gives it its gentle flavor. Apuxuri is used in preparations for spiritual cleansing, taking away negative energies. In the tribes they also use it for headaches.

New Hope is made by one of the tribes top rapé makers, Peu, a young man who spend many years on diets. He is the son-in-law of chief Nixiwaka and is part of Yawanawa royalty. The rapé is true Yawanawa using good tobacco and original Tsunu ashes. This rapé was made for meditation and prayer.

Onça or the Jaguar is the power animal of the Nukini people and the alter ego of our beloved Shaman Xiti Nukini, master rapé crafter of his people. This medicine has a deep masculine energy that helps earthing. It works firming the root chakra, preparing the sour to the crown. It is made with an undisclosed mixture of traditional herbs used in their ancestral spirituality.

Xacapandaré is a sacred herb from the Huni Kuin or Kaxinawa from the Jordão region days by boat into the deep forest. The recipe was conceived by Chief Siã Sales, one of the very first to leave the forest and take their medicines to the world.
The makers say this medicine cures all diseases. The herb benefits the respiratory system and according to traditional knowledge helps support memory and strengthens the mind. The leaves are burned as incense, to cleanse spaces.

A beautiful fresh Rapé from the Katukina tribe. It is made with a mixture of local organic moi tobacco and the more potent natural corda or ‘string’ tobacco. They add a touch of eucalyptus for extra freshness. It was made by the widow of the late Chief Fernando Katukina, a respected leader of the old school. Opens the throat Chakra promoting communication. 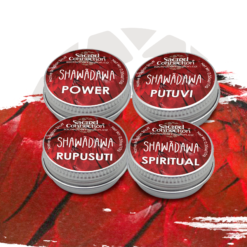 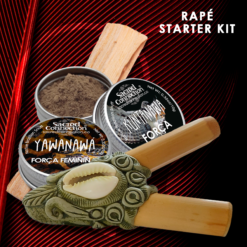