There was a time when death hadn’t reached humankind yet and the people lived in the forest, their king was called Ruwá. They provided their food by hunting, for this they had a special technique, there was a little hut in the middle of the forest where the chief would wait with his wife for the game to appear, the people made a big circle around the hut and came running inward beating on the foliage and driving like this the animals to the center where their leader was waiting for the kill. One fine day they were out hunting and as always Ruwá was waiting in the hut for the game to appear with his bow and arrow ready to shoot. The first animal to pass by the hut was a local type of fowl, one of the Chief’s favorite foods, he aimed and shot and the animal went down. His wife quickly went outside to pick up the bird and bring it inside. When she entered the hut she had a shock, there was her husband lying unconscious seemingly dead on the floor, she was terrified and shouted for help, quickly some of the tribesmen appeared and they carried him to their Shuho, as they call their big malocas (long houses) where they all lived together. After a while Ruwá came around and the people were relieved. Ruwá asked what happened and soon after inquired after the fowl he had shot, “What happened to the food? I’m hungry,” he said, and the people laughed relieved. “Quick, quick shouted his wife, go prepare our beloved leader his meal”.

When the food came Ruwá took the first bite and fell again, this time he was really dead. The people were surprised and couldn’t believe it and they cried.

The men came together and started to talk about what to do with their leader his corpse, one said let’s take it outside, another said let us burn it. “Let’s throw it in the lake” another suggested, and then the Pajé, the medicine man said let’s bury him here in the middle of our great house and so they did and life went on. After time something curious happened, different plants began sprouting over certain parts of his body.

A vine grew and they called it Uni, meaning something new, unknown before. In other places it is known as Ayahuasca but the Yawanawa and most other tribes of the pano root in the region call it Uni. On another part of his body grew Chili, a plant that people used in the old days for darker magical purposes. And then a leafy plant appeared and they wondered what to do with it and their wise Pajé told them to dry it and then take a bamboo or bone pipe and blow it up their nose and they called it Rumã or Rumé. Most people know it as Rapé or Sacred Snuff. And like this the magical medicinal plants came to earth and started to help the people to elevate their consciousness and heal themselves and others.

Chief Biraci explained me that the sacred Tabaco is a plant that cannot be used to do evil or black magic; it can only be used for healing, unlike for instance Ayahuasca that can be used for both sides. This doesn´t mean that Tabaco and Rapé cannot be bad for you if used wrongly or in excess, it means only that you cannot use it to do evil unto others.

Their old Pajé used to say that when you take Rapé you open a spiritual work, like when you drink Ayahuasca but less strong and different of course, but you access, or can access a higher state of mind and with that the spiritual dimension. That is why it is always good to take Rapé in concentration, sitting down for it, with calm and in a good environment where you don´t absorb negative energy from your surroundings.

The people in the forest take their Rumã for different purposes but when there is something to contemplate or an answer is needed the first thing is Rapé, concentrate on the issue, state the intention, ask the force and spirit to clarify and take the medicine in concentration to receive clarity on the issue at hand. When being very calm one can feel if the tingling sensation you feel is stronger on the right or the left side of the body and this can be used to know your answer, right is yes, and left is no.

Rapé when taken with calm is a good tool for meditation, it opens you up and makes you more sensitive to your surroundings.

It can also be used for healing or clearing up a situation, either from yourself or when the person knows how to, from others. In concentration the energy field that is created can be directed wherever your intention goes. For this one needs a clear mind free of confusion and a directed will power to take the energy with certain directness like a properly shot arrow to its goal.

In the old days only the medicine men took the medicines like Ayahuasca, if you went to look for a healing they wouldn´t give you the medicine to take but the Shaman drank and then in his vision he would either cure you or search the cause of your disease and the medicine to heal you.

On a lighter tone Rapé is used to bond with friends and family, in the afternoon after a good days work, talk about the day, about life, make jokes, watch the sunset over the forest and consecrate your Rumã, your Snuff, but always with calm, with respect for the medicine, a bit of silence and a positive attitude. 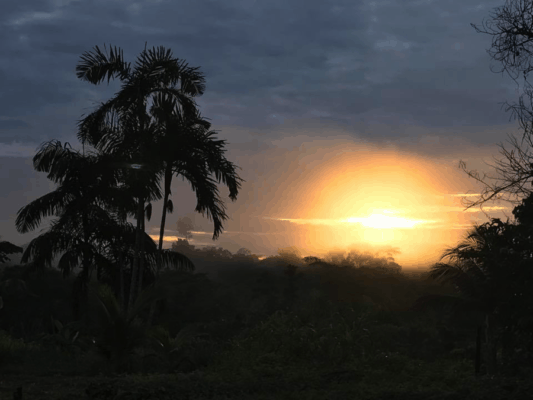