War, petroleum, and profit: with their backs against a cliff, the U’wa mobilize against oil extraction

Featured image: Inside the United U’wa Resguardo on the cloud forests along the Colombia-Venezuela border.
Photo: Jake Ling

This is the final installment of “The Guardians of Mother Earth,” Intercontinental Cry’s four-part series examining the Indigenous U’wa struggle for peace in Colombia.

The vast wetland savanna called Los Llanos stretches thousands of miles into Venezuela but it begins on the U’wa’s traditional territory at the base of the foothills below the cloud forests and paramos surrounding the sacred mountain Zizuma. For the last few years the worst fears of local environmentalists fighting on this forgotten frontline of climate change have come true: excessive exploitation of (though maybe that’s redundant since the categories already give a way to find stories about indigenous issuespetroleum in the Casanare region on the eastern border of the U’wa resguardo helped cause the desertification of large tracts of land in the swamps and grasslands across the province. An estimated 20,000 animals have died of thirst as traditional water holes evaporated and cracked under the strain of complete ecosystem collapse. Now, the only sign of life in places that once teemed with native species such as capybaras, deer, foxes, fish, turtles and reptiles, is the occasional vulture.

As Highway 66 snakes around the base of the mountain range, it passes several fortified military outposts guarding bridges and monitoring the flow of traffic towards Cubará in the Boyacá Frontier District. These bridges that once conquered the massive flows streaming down from the paramos above the clouds in the west now overlook small streams of water between riverbed boulders as Colombia plunges into a severe drought. 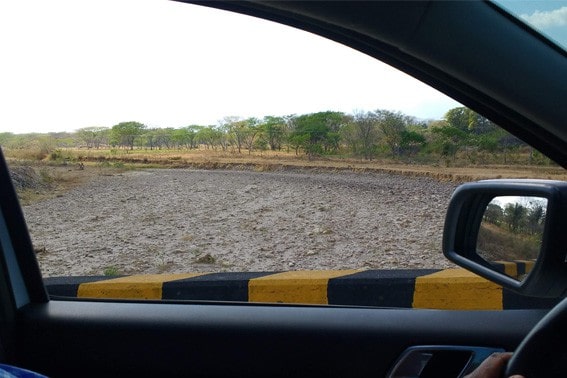 One of the many rivers that flow from the mountains in U’wa territory that are now almost dry as Colombia plunges into a severe drought. Photo: Jake Ling

Seventeen years ago, in the final week of April, 1999, an international event was organized known as U’wa Solidarity Week. It was the early days of climate change awareness when the world was just beginning to understand Global Warming and its potentially devastating effects on the planet. The international campaign against the oil multinational Occidental Petroleum had hit critical-mass after the kidnapping and assassination of Terry Freitas, the 24 year old co-founder of the U’wa Defense Working Group, and the two renowned native american activists Lahe’enda’e Gay and Ingrid Washinawatok, by FARC guerillas in eastern Colombia. Protests against Occidental Petroleum in support of the U’wa were being held in eight cities across the United States as well as in London, Hamburg, Lima and Nairobi. Meanwhile, in the background, the burgeoning power of a very young cyber-network called the Internet had created a space for the remote U’wa nation, heralding a new age of activism that facilitated vital connections between grassroots indigenous movements and environmental activists abroad.

Berito traveled to Los Angeles with another U’wa leader, Mr. Nuniwa, where the two men were received by organizations such as Rainforest Action Network, Project Underground, Amazon Watch and half a dozen other groups that planned to converge on Occidental Petroleum’s Annual Shareholder Meeting on friday, April 30th, 17 years ago.

At a dinner before the shareholder meeting the two U’wa leaders held hands to say grace with the two-dozen American activists around a feast of primarily vegan salads and vegetarian stews for the activists and dishes of meat for the chiefs. With the assassination of the American activists still painfully fresh in the minds of the the protest movement, the U’wa leaders proclaimed that after his death Terry Freitas had visited the dreams of the Werjayá, the shamanic healers of the U’wa in charge of communicating with the superior powers that flow through nature. In the dream Freitas was clutching a white snail shell, a symbol of spiritual purity and peacemaking, and the Werjayá declared the apparition of a god. The two U’wa leaders Berito and Nuniwa invoked their ancestors at the dinner table and summoned the spirit of Terence Freitas.

The following Wednesday, halfway through U’wa Solidarity Week, about 200 or so people marched from the University of California, where Freitas had studied, to Occidental’s headquarters a mile away. Many of the protestors were led away by the police.
“Why don’t they just finish us off for good, so we don’t have to struggle?” Berito told the Wall Street Journal, while his colleague Mr. Nuniwa expressed surprise that their march lasted as long as it did, considering the extremely aggressive tendencies of Colombia’s riot police.

The movement placed an advertisement in the New York Times — endorsed by Sierra Club, the National Wildlife Federation, Friends of the Earth, Oilwatch, Oxfam-America, Earthjustice Legal Defense Fund, the Center for International Environmental Law and others — warning Occidental shareholders of the political and environmental risks of the mining project: “U’wa territory will not be spared the oil wars raging in the nearby Arauca area, where a violent attack on Oxy’s pipeline occurs every eight days. Meanwhile, those familiar with U’wa culture warn that their suicide pact must be taken seriously. U’wa oral histories recount an event four hundred years ago, when an U’wa band leaped from a cliff rather than submit to the Conquistadors.”

As protestors picketed the building hosting the shareholder meeting, inside Occidental’s chairman and CEO Ray Irani, seethed as the U’wa leader Berito lectured him for 45 minutes. Berito sang a sacred song in the U’wa tongue which he told protestors the previous night at dinner would be about “Mother Ocean and her breath, the wind, which sweeps up our words to the gods.” The 1,000 or so shareholders in attendance applauded the U’wa leader. Chairman Irani’s response was to declare: “The fact of the matter is your problems should be discussed with the Colombian government, not here… It doesn’t matter what Occidental does or doesn’t do.”

U’wa leader Berito Cobaria battles Oxy CEO Ray Irani at the oil multinationals Annual Shareholder Meeting 17 years ago. Drawing by Bolivian artist Pablo Ruiz
The Sinsinawa Dominican nuns, who held 100 Oxy shares, proposed that the oil multinational hire an independent firm to analyze the potential impact on the company’s stock if the U’wa people’s pledge to commit mass-suicide was fullfilled. The proposal, which Terry Freitas had helped draft, went on to win approval from 13 percent of Oxy shareholders, totaling over 40,000,000 shares, exceeding the expectations of the activists and forcing those opposed to consider the consequences.

After the meeting, Chairman Irani and the other directors made a stealthy exit out a side door where their limousines waited on the opposite side of the building to the protestors. Irani told the Wall Street Journal, “The U’wa use these activists very effectively.” Meanwhile Oxy Vice President Lawrence Meriage complained that the campaign was a concoction of certain activists up in the Bay Area and suggested the U’wa were being manipulated by U.S. environmentalists dead set against oil exploration, as well as the Colombian guerrillas that his company helped finance since the 1980’s. “We feel as a company that we’re caught in the middle,” said Mr. Meriage.

“We demand an announcement by Occidental that it is canceling its project on our ancestral land,” said Berito, “There is nothing else left for the company to do.”
As outrage over Occidental Petroleum’s behaviour in Colombia continued to grow, the oil multinational pushed ahead with their plans to exploit the petroleum block on U’wa territory. The next year, in February 2000, several hundred indigenous people and thousands of Colombians mobilized to block roads and prevent heavy machinery from arriving at the drilling site. The demonstration ended in tragedy as Colombian security forces violently dispersed the protestors with beatings and tear-gas leading to the tragic death of three U’wa children who drowned in the river while trying to flee government troops.

Occidental Petroleum pulled out of petroleum block on U’wa territory in May 2002, 10 years after the U’wa first threatened to commit mass suicide in protest. That same month, as senior members of the U.S. government publicly rallied against the FARC for the “terrorist murder” of Freitas, Gay and Washinawatok, President George H.W. Bush proposed $98 million in military aid to the Colombian government to protect Occidental Petroleum’s Caño-Limon-Covenas oil pipeline.
“We are dismayed to see the Administration’s cynical and exploitative use of Terence’s murder to justify further U.S. military aid to the Colombian armed forces,” friends and family of Freitas stated in response to the President’s proposal. “Employing Terence’s death as a means to continue perpetuating violence in Colombia grossly contradicts everything Terence believed in.”

“This isn’t about corporate welfare, it’s not about protecting Oxy,” a State Department official said. “It’s a security argument, not a U.S. economic interests argument.” The $4 million dollars that Occidental spent lobbying the U.S. government, however, certainly paid off for the company.
As the U’wa struggle slowly faded from the consciousness of the international community, the oil wars in eastern Colombia continued to escalate with the $98 million injection of U.S. military aid. Despite the U.S. State Department designating the AUC – the United Self-Defense Forces of Colombia – as a terrorist group in 2001, these paramilitary death squads formed the vanguard of the Colombian Army’s surge into the ELN stronghold of Arauca province, along the Caño-Limon-Covenas pipeline.

The Colombian army, meanwhile, received additional funds totaling billions of dollars coinciding with the kidnapping and execution of thousands of Colombian civilians, whose bodies were then dressed up in guerrilla uniforms to artificially inflate body counts, a crime known as the “scandal of false positive.” Between 2000 and 2010 the Colombian military kidnapped and executed 164 civilians in Arauca, 122 in Boyaca, 301 in Norte de Santander, 209 in Casanare, the four provinces bordering the U’wa Nation’s territory.

Occidental Petroleum’s direct financial and logistical support to the Colombian military included a specialized meeting room inside the Oxy-fortified compound for the 18th Brigade that operates in Arauca and the Boyacá Fronteir District of Cubara with the mandate of protecting the Cano-Limon-Covenas. Commander César Oswaldo Morales of the military’s 18th Brigade was imprisoned in 2012 for kidnapping and executing civilians years earlier in northern Colombia.
In an effort to deescalate the war, an agreement between the government and right-wing paramilitaries saw the AUC begin to lay down arms in 2003. The demobilization, which is widely viewed as a failure, led to the rise of neo-paramilitary groups called BACRIM that continue to threaten and target the civilian population and indigenous people who protest the contamination of their lands and waters by oil operations in the region.

In 2006, the BACRIM inflicted a reign of terror in the Catacumbo region of Norte de Santander, displacing 8,000 civilians over a few months to the north of the U’wa resguardo’s border. It was the same year that Colombia’s Interior Ministry cleared the way for state-run Ecopetrol to begin new explorations in the U’wa territory on behalf of the Spanish oil giant RepSol, as well as on another site inside U’wa territory to the west of the Gibraltar drilling site.

There is not a pipeline on the planet that has been bombed as many times as the Caño-Limo-Covenas. It is an engineering marvel that reaches deep beneath the war-torn province of Arauca and stretches 780 kms (480 miles) across the country to the Caribbean and the effluent discharged into the rivers and lakes that surround the oil well make them no longer fit for human consumption. The several hundred bombings that have ruptured the length and breadth of the pipeline have also polluted 1,625 miles of rivers with thick cancerous crude, leaving a devastating legacy for the local indigenous and rural populations.