One of the two indispensable ingredients In Sacred Snuff is the ash and with that probably the most mysterious and least understood. It is the fire element added to the earth, it is what gives strength and lifts you up. All the Shamanic Rapés that we know and love use it. Only the green Awiry from the Apurinã, the Nunu from the Matses and the old-fashioned snuffs don’t use ashes.

Why is there ash in Rapé, what is it there for? The ash serves as an activator giving strength to the medicine. Many of the indigenous sacred medicines and stimulants used around the world make use of this principle. The inhabitants of the Andes mountains who chew coca leaves, the Indians (from India) who chew Pan, the betel nut and its leaf, the tribes that use the Yopo snuff, all use the same technique of using their favorite plants in combination with a base activator. It can be in the form of lime taken from crushed shells, bi-carbonate, ashes prepared from a variety and other sources. Most close to Rapé is the Yopo Snuff made from Anadenanthera seeds that is used either with some form of natural occurring lime or specially prepared ashes. 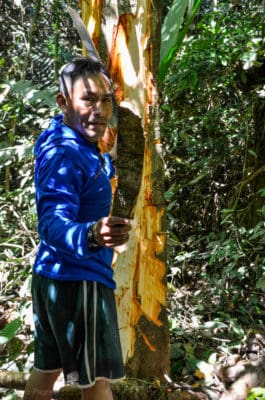 In general people think ash is ash and there is no more to it, but that is a great misgiving. In the first place to burn a nice white ash and not a grey mess is already a bit of an art. When we burn the bark and or wood from a tree we get at first glance just a nice white or whitish ash. This ash already has certain characteristics; it has a particular texture and taste. For the layman it is nearly impossible to distinguish but for those who really know it can be identified. The top Rapé crafters from the forest can recognize a type of ash by feeling it between their fingers, looking at the texture and sometimes by tasting it.

When the wood is burned the cellulose burns and turns into the white ash we see, but most of the salts, alkaloids and other particles survive the fire and stay present in the ash in different proportions. These give some of the beneficial and healing qualities to the product.

On a more subtle and energetic level the ashes bring the fire element into the medicine. Tobacco represents the earth element. When smoking tobacco it has a very grounding effect, we perceive this when using tobacco after a medicine circle or just when one is stressed, it earths you. When using traditional snuff that has no ashes you can note a very clear difference with Shamanic Snuff, where pure snuff is more grounding the Sacred Snuff is more uplifting and takes you to another level of perception.

The fire element is represented and introduced in the medicine by the ashes that have been purified and transformed in the fire. We can also say that it is the activating principle of the ash as we mentioned before that alters the way our body receives it. These are different ways to explain the same thing, one more occidental the other more mystical and indigenous.

The texture of the wood gives the consistency to the ash, that is why most of the wood types used for Rapé ashes have a tight grain, and they are very hard and dense. Trees with softer wood types don’t produce good ashes, they don´t give strength to the medicine and the Rapé spoils easier. There are a few exceptions, but it is a general rule. For instance certain types of vines can be used to make ashes although we don´t see much of those because they have in general a low yield. 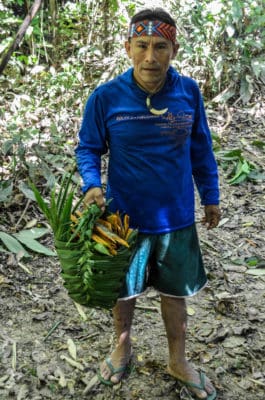 The most common ash used for Rapé is Tsunu, the classic ash of the Yawanawá. Other ashes commonly used are Murici, Pau Pereira, Parica, Cacao, Cumaru, Mulateiro and Canela de Velho. Some more rare ones are Sapota, Balsamo and Emburana and there are others.

On internet circulates information that Tsunu is Pau Pereira, this is not correct and to say what tree is Pau Pereira is complex because it depends on where in Brazil you go what tree they name Pau Pereira. Most of the names used to identify these species are local folk names and in different regions of Brazil they use the same names for a variety of plants. Nobody knows the scientific names and they are nearly impossible to find except for a few more commonly known types like Cumaru that are used for lumbar. Even within locally and from tribe to tribe there are different trees identified with the same names, Tsunu is an example.

Most trees I have tried to identify using the oracle, Google, have proven wrong after verifying with people in the know. Traditionally the Rapé makers burned of most varieties only the bark. Nowadays with the expansion of Snuff consumption they burn in general the bark and wood together to increase the yield. Apparently the bark contains most of the properties, we can see that from many medicinal trees teas and other preparations are made from the bark, hardly ever from the wood, so with the ashes. Unfortunately not everyone burns the correct wood, there are always unethical people or people without the proper knowledge, that´s why it is always good to know the source of your medicine.

The art of ash

Burning good ashes is an art that not everyone dominates. You have to find the correct tree type for the ash you want, and then you have to burn it very hot to get a nice white ash, sounds simple but is still an art. The ash shouldn’t get humid so it has to be kept dry before sunset or has to be kept burning during the night not to get spoiled by the nights dew. Medicine can spoil quicker when using the wrong ash, it can excessively clog up your nose or just not have the desired effect.

When asking another friend and connoisseur from the forest about the ashes he told me the following.

“The ash is what cleanses the nose, releases the mucus; the tobacco by itself doesn’t clean. Tobacco is anti bacterial; the ash is antiseptic, anti-inflammatory, it is what heals. It is a long study, no end to it, after seventeen years working with the medicine I still learn everyday. When we do a diet with the medicine I tell people the following: Rapé makes you grow roots and afterwards takes you up high.”

This last observation is very interesting and deserves elaborating. The first few times one uses Rapé it can bring down your pressure, make you lay down, even feel sick but then you learn to keep your firmness and concentration, it gives you roots, it helps you to be more grounded. Once you have roots you can fly away!

Ashes around the world

In Ayurvedic medicine there is an extensive science, nearly a form of Alchemy related to the making and applying of medicinal ashes, the so-called Bhasmas. They make ashes from the greatest variety of substances, from plants but also from minerals and certain metals. Every substance burned and transformed by fire has its own properties and with that its own usage. The Bhasmas are very powerful medicines used in “normal” medicines but have a special place in Rasayana, the science of rejuvenation. This elusive practice even in Ayurveda has by nowadays nearly been lost.

And just to mention it, Ayurveda has also the practice of Nasya, which is the use of medicinal snuffs that are blown gently into the nasal passages for a variety of ailments, but that is another story.

The Sadhus, the sparsely clad or naked ascetics from India, extensively use sacred ashes. They smear their bodies with the ashes of their holy fires that are charged with the energy of their mantras and meditations. It has mystical uses but also practical ones like protecting against insects. To grow their sometimes metres long dreadlocks they also use special ashes, again they burn particular plants that help to strengthen the roots and strands of their hairs and speed up its growth.

The ashes used with coca leafs in Bolivia are made of quinoa, plantain bananas and other plants.

In West Africa they make their traditional soap using ashes. Again they burn a certain mixture of plant materials and mix these ashes with oils to create a reaction that turns the oil into soap. This soap is known to be very good for the skin but is also used in their religious practices for energetic cleansing.

Transforming materials through fire is the essence of Alchemy, it may range from a simple fire to make a proper ash for Rapé to the ancient Ayurvedic art of making rejuvenating Bhasmas and even far beyond when we get into the ancient art of true Alchemical transformation, but that is another story. Fire transforms and has the power to purify everything it touches. In the Ayurvedic art of making Bhasmas that is the function of the fire, to purify these elements and make them suitable for consumption and augment or activate their healing power 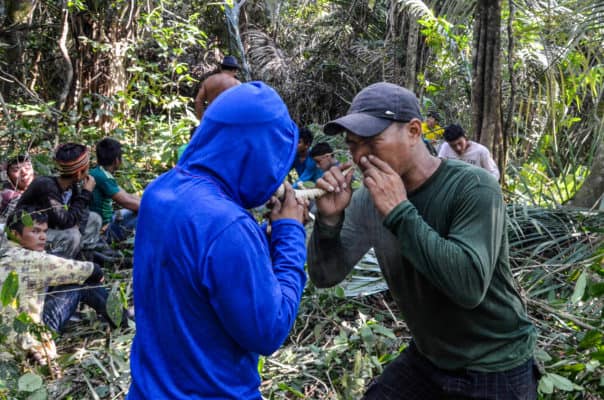 When producing Rumã, as the Yawanawá call their Snuff ones intent and state of mind is essential, everything the person thinks and wills while making the medicine is transferred to and stored in that medium. For this reason it is important that the people producing the medicine do so with clean intentions, a positive attitude, are kind hearted and have a certain level of spiritual evolution. All our Rapézeiros, Rapé crafters, are people fully dedicated to their traditions, Txais (brothers) who are guided on their spiritual path by those very medicines and we feel that this reflects in the quality and the message they communicate through the Rapé they share with us.