Bone Kuripe is made of Jagube, a popular vine from the Amazon region. It is really important in religious rituals. Along with the Psychotria viridis shrub known as Chacrona, the species is raw material for one of the most popular drinks in the spiritual world, the Ayahuasca.

The materials are high quality and of high importance in the spiritual world.

How to use Kuripe?

When blowing snuff, use your Kuripe in the following way: load it with the right amount of Shamanic Snuff for your personal need. Then put one end in your mouth and the other in your nose. Without inhaling, gently blow the rapé into your nose.

Our friends at the Tete Pawã arts and medicine collective have made this beautiful Kuripe. It has a 10ml Rapé container crafted in the finishing of the piece, helping you to keep everything you need in one place.

Be the first to review “Bone Kuripe – Jagube” Cancel reply 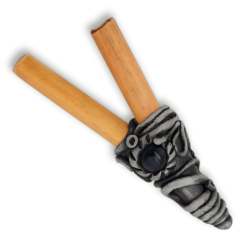 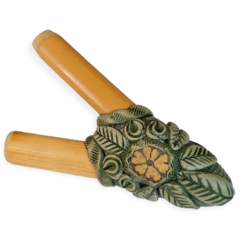 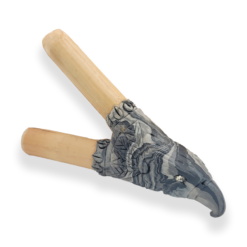